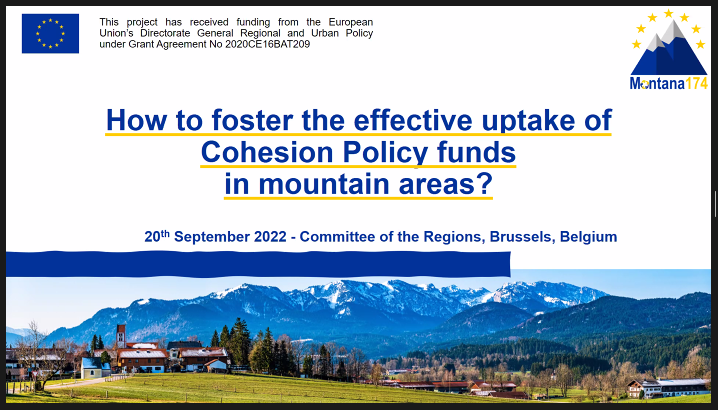 “The Cohesion Policy is of great benefit to mountain areas, but its efficiency can still be improved”. This was the general message of the final conference of Montana174, organised by Euromontana at the European Committee of the Regions on 20 September 2022. Euromontana is the pan-European network representing mountains, and has regularly collaborated with MOVING.

Mountain areas and the EU

Cohesion Policy offers important funding opportunities to invest in costly infrastructure and basic services in mountains, as highlighted by members of the Committee of the Regions Marie-Antoinette Maupertuis, President of the Regional Assembly of Corsica (France) and Władysław Ortyl, President of the Podcarpackie Region (Poland). Ms. Maupertuis (supported by MOVING partner AEIDL) is presenting an Opinion on 28 September whose drafting benefits from the input of many mountain stakeholders, including Euromontana.

Mr. Maupertuis is proposing a more ambitious reading of Article 174 of the Treaty on the Functioning of the European Union. She argues that mountains (and other areas with geographical handicaps) do not only need to be recognized and receive particular attention. They must also be the subject of specific priorities in EU Cohesion policy, and there are several ways to do so even in the 2021-2027 programmes. Furthermore, the Lisbon Treaty can be also interpreted in a much more ambitious way, as the Charter of Fundamental Rights does require that basic services are provided across the EU, including in mountain areas.

Mr. Ortyl, the rapporteur of the Committee of the Regions on the Carpathian macro-regional proposal, provided a very detailed view from the ground of both the opportunities and many challenges of delivering Cohesion Policy in mountain areas including via Macro Regional Strategies such as in the Carpathian. Although Cohesion Policy is an essential lever for reducing territorial inequalities, progress is still needed to improve its effectiveness. The complexity of the funds, the high number of interlocutors, and the lack of expertise and skills in some mountain areas make it more difficult to absorb the funds in mountain areas. This calls for more information and capacity building but also, as raised by some speakers, for more simplification. For more efficiency on the ground, it was also insisted that Cohesion Policy funds should finance an integrated territorial development strategy, with calls and programmers all aiming at common objectives.

In addition, the conference highlighted the lack of earmarking of funds to mountain areas. Progress has been made with the promotion of rural development through CLLDs and ITIs in the framework of the new Policy Objective 5 “Europe closer to citizens” of Cohesion Policy 2021-2027. In this respect, Ms. Wallis Goelen Vandebroeck from DG REGIO outlined the enormous and unprecedented opportunities for local areas, including mountain areas that are open through Policy Objective 5. Florian Marin, a Member of the European Economic and Social Committee painted, however, a more sober picture, stressing the difficulty to increase the uptake of Cohesion Policy funds across Romanian regions.

There is no specific envelope dedicated to Article 174 areas in this new fund structure, as also stressed in Ms. Maupertuis’ draft opinion at the European Committee of the Regions “Enhancing Cohesion Policy support for regions with geographic and demographic handicaps (art 174 TFEU)”. As Carla Lostrangio who facilitated the first part of the meeting pointed out, Montana174 project found that most often mountain actors are unaware of the opportunities driven by the Cohesion Policy. To solve this, better communication on existing opportunities to mountain actors, as well as one-stop shops to facilitate the understanding of the different funds and more capacity-building opportunities on how to access these funds would be highly welcomed. Additionally, a dedicated European study with a high granularity of analysis (NUTS-3 or NUTS-4 level) on the absorption of Cohesion Policy funds and barriers to it would be particularly valuable. Spatial targeting and good local data are points particularly emphasized by expert Erik Gløersen.

Based on the findings of the Montana174 campaign and on the relevant recommendations made by Ms. Maupertuis in her opinion, Guillaume Corradino, Director of Euromontana, called for more capacity building to support local stakeholders and invited the European Commission to better consider the needs of regions of article 174 in the post-2027 Cohesion Policy.

Through Montana174, a one-year communication campaign on Cohesion Policy, Euromontana and its partners promoted numerous initiatives financed by the cohesion funds in mountains to improve the quality of life of local communities. Good examples in the field of youth employment, adaptation to climate change, mobility, and more can be found in the project’s good practice brochures and videos.

The details of the interventions during the Montana174 conference “How to foster the effective uptake of Cohesion Policy funds in mountain areas?” can be found in the event report.

Smart mountains thrive to be resilient, say stakeholders at XII European Mountain Convention
Getting to know Labex ITTEM: mountain research programme in Human and Social Sciences
Farm certification schemes for sustainable agriculture: specifications for origin and quality of the...
Pessimism, the feeling of youth towards the carob flour value chain in Crete