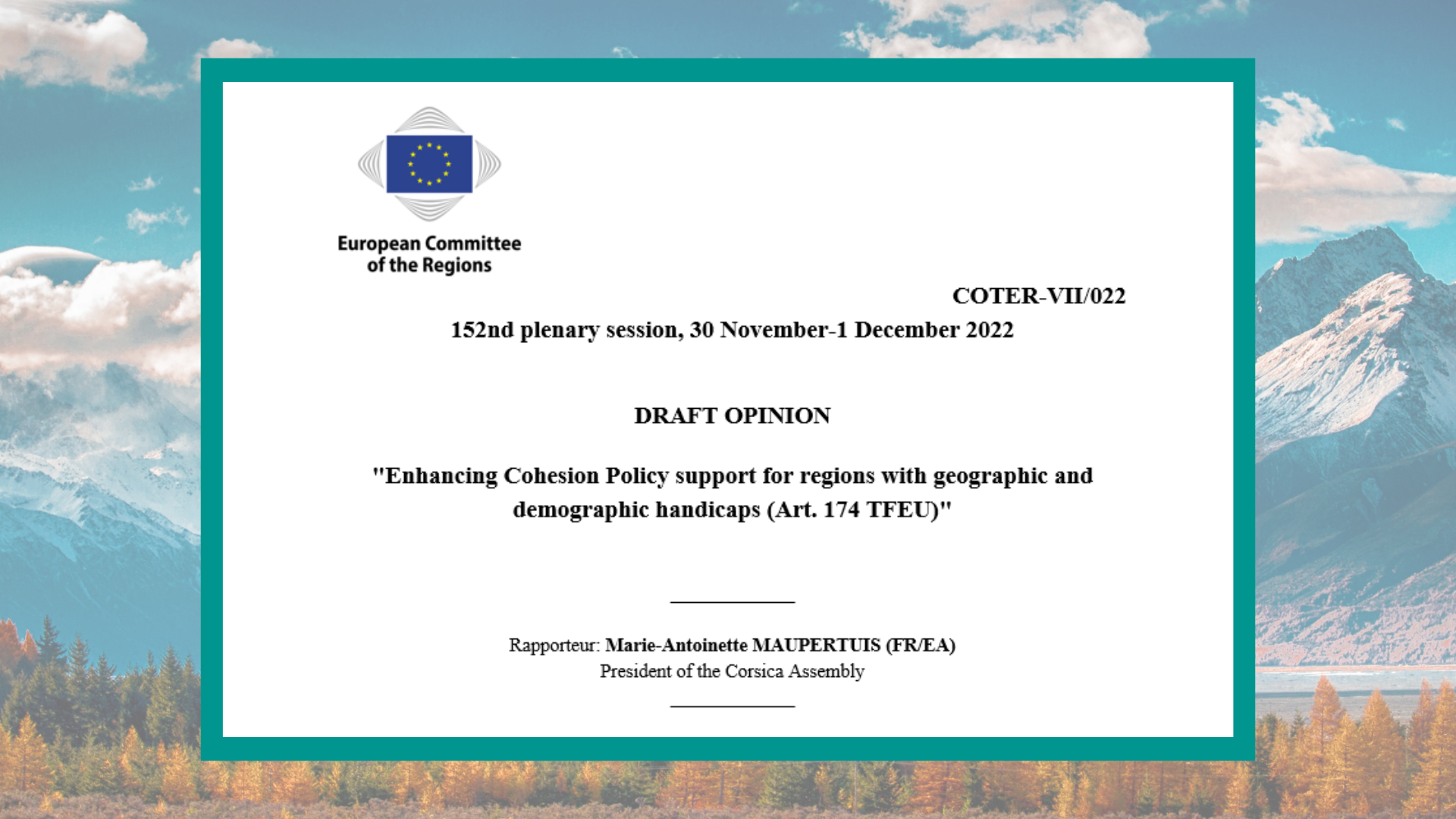 Remote territories shall be considered by EU policies, reaffirms the EU Committee of the Regions

On 1st December, the European Committee of the Regions adopted the opinion of Marie-Antoinette Maupertuis, President of the Corsica Regional Assembly, on “Enhancing Cohesion Policy support for regions with geographic and demographic handicaps (Article 174 the Treaty on the Functioning of the EU)”.

Released in early 2022, the 8th Report on economic, social and territorial cohesion in the EU reveals that there are still important disparities among European regions and in particular, remote territories lag behind. The principle of territorial cohesion is recognized by Article 174 of the Treaty on the European Union. This article states that Europe should strive for a harmonious development of its regions and a specific attention should be put on rural areas with permanent geographic, natural or demographic barriers, such as sparsely populated regions, mountains, islands, and cross-border regions.

In her opinion, Ms Maupertuis called for a greater integration of these regions in the various European policies, beyond the Cohesion Policy, and she suggested concrete measures tailored to the diversity of rural territories. Dr. Serafin Pazos-Vidal, Senior Expert on Rural and Territorial Development from the European Association of Information on Local Development (AEIDL), partner of MOVING, was among the lead experts that supported this opinion.

The European Union does not respect its founding treaty if it doesn’t sufficiently take into account the constraints of territories like islands, mountains and rural areas. Their geographical condition implies additional costs for services like transport, energy, digital connectivity that need to be considered in order to not increase interregional disparities. Therefore, the Committee calls for the needs of these regions to be included in the development of the various EU policies with a territorial dimension, beyond Cohesion Policy.

The debate on the plenary went on the need to reaffirm Article 174 through the European Cohesion Policy. Besides, the European Committee of the Regions underlined that the current efforts of the European Union in promoting cohesion via the Territorial Agenda 2030 and the new Long-term vision for rural areas may be insufficient.

The work done in MOVING also underlines a significant lack of data available at the mountain level in different fields: social services, digitalisation, gender gap, generational renewal, and the sustainable use of natural resources.

Evidence from MOVING’s results is summarised in our Policy Briefs. These documents include the description of the Mountain Reference Region (MRR), the value chain (VC) contribution to sustainability and resilience of the region, some innovation components of the VC and a number of policy recommendations tailored to the unique characteristics of each of the mountain regions.

To know more on the plenary at the Committee of the Regions, read the press release.

Consequences of the transformation of agricultural landscapes on ecosystem services in the European ...
New mountain professionals on the way!
Youth for mountain sustainability: making their voice heard in decision-making processes
Discovering the singularity of high mountain products: an interview with Toni Massanés